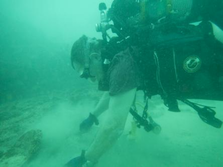 Additional interesting literature about the M.V.DARA as debated in the House of Lords.

SINKING OF THE M.V. "DARA"
HL Deb 11 April 1961 vol 230 cc244-5 244
§ 3.38 p.m.
§ LORD CHESHAM
My Lords, I think it might be convenient if I intervened at this stage to make a statement similar to that which has just been made by my right honourable friend the Minister of Transport in another place.
I am informed that the British India Steam Navigation Company's motor vessel "Dara", of 5,030 gross tons, was anchored in the port of Dubai on Friday evening, April 7, when she was struck by another vessel which had dragged anchor. The master decided to put to sea as the weather was deteriorating, intending to return in the morning. A total of 770 persons, including 132 members of the crew, are known to have been on board.
Early on Saturday morning, an S.O.S. was sent reporting the outbreak of fire, and the ship was abandoned at about 6.30 a.m., when some 40 miles from the shore. An Army tank landing craft, a number of ships of the Royal Navy, and several British and foreign merchant ships proceeded to the scene and picked up survivors. Five hundred and eighty persons were saved, but it is feared that the 190 who are missing, including 30 members of the crew, have lost their lives.
After the ship had been abandoned, fire-fighting operations were undertaken from alongside the vessel in difficult conditions by three Royal Navy frigates. She was taken in tow, but finally sank on Monday morning some five miles off the coast before she could be beached.
My right honourable friend the Minister of Transport has ordered a formal investigation, which will be held in public, into the tragic circumstances 245 attending the loss of this ship, and the necessary preliminary inquiries are already in hand. The House will wish me to express its deep sympathy with the relatives of those who have lost their lives and with the injured, and to pay tribute to the efforts of all those who took part in rescue operations, without which the loss of life would undoubtedly have been even more serious.
§VISCOUNT ALEXANDER OF HILLSBOROUGH
My Lords, I am grateful to the noble Lord for giving the House the statement made in another place on this shocking disaster. We join with him in extending our sympathy, as I am sure all Members of the House will desire to do, with the relatives of those who have lost their lives. I do not think that it is possible at this time to make any comment on the incident. There will be an inquiry. One wonders how such a thing could have happened so suddenly, and I do not know whether we shall ever be able to get the true facts. I hope that as soon as the Minister is able, he will publish a report of the inquiry and give us a chance of studying it.
§ LORD AMULREE
My Lords, on behalf of noble Lords on these Benches, I also should like to thank the Minister for the statement he has made, and to associate my noble friends and myself with the sympathy expressed to the relatives of those who have lost their lives in this disaster.

Diving MV Dara Commemorating the 50th anniversary of her sinking.